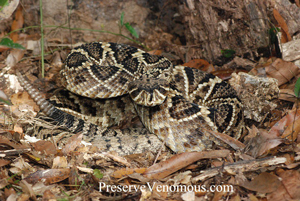 The Whigham Rattlesnake Roundup was, on the whole, a lot better than I expected. I expected to see Sweetwater. I expected blood and horror. I expected wholesale slaughter on a grand scale while children watched and were convinced to participate.

I saw none of that. What I saw was repugnant, make no mistake, but it seemed to be more a result of gross misunderstanding or at worst willful ignorance. Nobody at the roundup seemed bent on seeing the snakes killed, and many seemed appreciative of their natural beauty, if perhaps a bit unaware of the gravity of their situation. I believe this event still carries on with its more distasteful traditions because they are just that: tradition. Yet, there was a palpable level of defensiveness about the festival – as if the officials knew they were doing something that others disapprove of and were just waiting the chance to be “persecuted” for it.

When I arrived at the roundup, the first thing I noticed was the sheer number of people. There were hundreds if not thousands from all over South Georgia and the Florida Panhandle. People of every age, race, and walk of life it seemed. A hugely diverse crowd that was gathering for gathering’s sake. I mean, why not? There were food booths, bouncy castles, rock walls, musicians, and various local artisans and crafters selling one-of-a-kind handmade goods. The one thing that was really difficult to find, in fact, were the rattlesnakes themselves. There was only one booth selling leather goods made from snakeskin and no booths selling snake meat. The only exotic meat I saw was alligator tail, and the biggest alligator farm in the country is only 35 minutes away in the town of Camilla1. I found the rattlesnakes eventually. And while they weren’t held in a giant pit Indiana Jones-style, they were being kept inhumanely.

Whigham’s Rattlesnake Roundup hosts a hunting contest, offering cash prizes to the men who capture the most snakes over the course of a year. On the day of the Roundup, these men take the snakes they’ve caught and place them in large wood and Plexiglas containers (about 3 feet by 5 feet), dividing them according to size and species. Most of the containers with near or full-grown snakes only held about ten to fifteen, but some held as many as twenty or thirty. Now, according to the people I spoke to, the snakes are fed every two weeks and are treated more like pets than trophies. This might be true for some, but a lot of the snakes I saw looked underfed and they all looked incredibly stressed and frightened. If you look at the Canebrake cage, they’re all writhing in a pile; desperately struggling to hide underneath one another. If you look in the adult Diamondback cage, they’re hissing and striking and biting one another. As much as it pains me to admit, I’d rather see this than the events at Sweetwater, Texas. However, that doesn’t change the fact that animals who have done no harm and whose population is dwindling are being hunted for entertainment.

But was it entertaining? The people who seemed most entertained were the ones able to enter the corral where the enclosures were kept and given a chance to look at the snakes up close. They were asking questions and learning; children remarked about how pretty the snakes were to the indulgent smiles of mothers. Everyone else on the outside looked kind of bored, like they were waiting for something to happen.

An interesting fact to keep in mind is that Georgia has no regulation on the hunting of venomous snakes. The Department of Natural resources only mentions them in its last paragraph of hunting regulations: It is unlawful to take nongame wildlife except fiddler crabs, coyotes, armadillos, groundhogs, beavers, starlings, English sparrows, pigeons, and venomous snakes2. Most of the species mentioned here are considered invasive species or pests. There are no limits, no regulations, and no legal protection over the hunting of rattlesnakes in the state of Georgia. There is no time in which you cannot hunt them. There are no conditions dictating what kind of weapon, means, or tactics you use. No rules against taking gravid females or the one breeding male from an area. According to an official at the roundup, the only time rattlesnake hunters are asked not to hunt is during active days of deer season. While the IUCN Red List still lists the Eastern Diamondback Rattlesnake as Least Concern, its population has been trending downward at a rate of about 10% over three generations. It mentions that roundups like these account for about 2,000 rattlesnake deaths each year3.

About midway through the festival, one of the officials took up a microphone and began assuring the crowd that, despite the low numbers of snakes present at this year’s roundup, the population in the area was still thriving. He attributed the low numbers to a low turnout of hunters and atypically warm weather leading to a longer active deer season. Yet one website made for the roundup in 2002 mentioned a noticeable decline in both the snake population and the size of the snakes found (though whether this was in an official capacity is hard to deduce.) It colored this observation by mentioning that the number of snake bites had gone down in recent years as well4. The official at the roundup continued to say that this festival was important to the financial wellbeing of the county, and that people who didn’t live in Georgia were trying to shut down an honest and legal attempt at raising funds through the hunting of a dangerous animal.

So how do you hunt rattlesnakes? Well, a common way is to pour gasoline down its burrow, light it on fire, and smoke it out. But the problem is that rattlesnakes don’t burrow. They live in the holes already dug by other animals, mostly Gopher tortoises and small mammals. It’s exceedingly difficult to tell whether or not a rattlesnake actually lives in the hole until you light it on fire, and many Gopher tortoises have died as a result of this. The fumes and ash make it difficult for this burrow to be used by any other animal in need of shelter. This practice is illegal, but difficult to enforce. It’s just another one of the egregious environmental costs these rattlesnake roundups impose5.

According to the official, most of the snakes would be donated to universities for research purposes after the roundup. Some of the snakes would be killed for meat and skin (though he used the euphemism “processed”), and a select few would be given away to residents of rural areas and farms who want added pest control. It was never discussed which universities would be receiving the snakes or whether the snakes would survive their research, but ultimately it doesn’t matter. These snakes have been removed from their natural habitat and the population has taken a substantial blow. A blow which sustains itself every year this roundup continues.

I understand their motives. South Georgia and North Florida are both plagued with staggering poverty. Every attempt to bring wealth to the area is fiercely protected. But I believe they’re mistaken on one fundamental point: they don’t need to hunt rattlesnakes in order to have this festival. The Claxton Rattlesnake Roundup recently changed their name to the Claxton Rattlesnake and Wildlife Festival. The Georgia Department of Natural Resources even donated a large collection of native reptiles to the Claxton community in exchange for their discontinuing the rattlesnake hunt. What’s more is that their attendance increased after this change. More people came to learn and appreciate nature than to revel in fear and cruelty6.

This place obviously isn’t Sweetwater, so treating them like Sweetwater probably won’t work. They’ve ignored every petition, phone call, protest, and online request. The Georgia Department of Natural Resources has offered Whigham the same thing they offered Claxton: a menagerie of native reptiles in exchange for a promise to stop persecuting rattlesnakes. Whigham refused. The Georgia Reptile Society stands in opposition of this event, but we do see an inkling of hope in the attitudes of the festival-goers here and in Claxton. We’re going to visit Whigham personally to offer the same thing the DNR offered. We will come down ourselves and host our own reptile exhibition on the day of the Roundup in exchange for the lives of Georgia’s wildlife. We will bring our own pets, our own expertise, and our own sweat and give the city of Whigham and its residents an exhibition of native and exotic reptiles they won’t soon forget.

So how can you help? If you live in the state of Georgia, you can join the Georgia Reptile Society. Your membership fees not only make our meetings fun and exciting, but also go directly towards projects like this. If you don’t want to join or if you live outside of Georgia, you can give directly on our website through a secure PayPal donation. Whigham is quite isolated and getting there involves several hours of driving from even the closest of large cities. Any help you can offer would be greatly appreciated and would serve to aid these animals that are suffering from deadly ignorance and fatal persecution.

5. http://www.iucnredlist.org/details/64308/0 - Under “Major Threats” - Another direct threat is the collecting of rattlesnakes for the skin trade and for competition for prizes in rattlesnake roundups held annually in Alabama (1) and Georgia (3). While probably not a serious threat in itself, when coupled with habitat loss, this sort of collecting is additive. It utilizes the practice of gassing the burrows of the Gopher Tortoise in winter (illegal in Florida and Georgia), sometimes killing rattlesnakes outright, and usually impacting the other fauna inhabiting burrows (Speake and Mount 1973).

6. http://yubanet.com/usa/48-000-People-Call-on-Last-Remaining-Georgia-Rattlesnake-Roundup-to-Switch-to-Humane-Wildlife-Festival.php#.UQnA-mewWJ1 - All of Georgia's other roundups have abandoned the outdated practice of removing rare rattlers from the wild. Last year Claxton, Ga., replaced its roundup with the Claxton Rattlesnake and Wildlife Festival, which displays captive rattlesnakes, along with many other educational wildlife exhibits. While attendance at the Whigham roundup dropped in past years, the new wildlife festival in Claxton received a boost in attendance and high praise from environmental groups, the Georgia Department of Natural Resources, biologists and others who have lobbied for years to end rattlesnake roundups.